Pskov lies in the north-west of Russia, on the border with Estonia, 280 km away from St.Petersburg, 352 km from Tallinn, and 308 km from Riga. We offer you to have a pleasant walk there and to enjoy its history. From time immemorial, Pskov was the guardian and protector of the Russian land. Pskov is one of the oldest cities of Russia, first mentioned in chronicles in 903, and was founded as they say by Grand Princes Olga, the first Russian Christian woman. It celebrated its 1100 anniversary in 2003. It was the strongest fortress on the western border of Russia. This fortress stands on a long, rocky promontory between the Pskova and Velikaya rivers. Those, who once came to Pskov bringing war and devastation, saw the invincible might of the fortress walls, the unshakable strength of Pskov. Foreign commercial relations were of great importance for Pskov. Silver Arab drachma appeared in Pskov already in the 9th -10th centuries, and West European money came to Pskov in the 11th to 12th centuries. The Pskovites exported furs, wax, honey, tar, flax, leather, fat and grain and imported salt, herring, expensive cloth, wine and fruits, paper, non-ferrous metals. In the beginning of the 18th century, after Russian Tsar Peter the Great had captured Estonia and Latvia, Pskov’s role as the border citadel of Russia ended. So the importance of the city reduced greatly. Pskov, although it is a small city, has a rich cultural heritage, which is evident from vast number of ancient monuments, monasteries, churches and forts around Pskov. The earliest monuments go back to the 12th century, the latest to the early 20th. Pskov suffered greatly during the 2nd World War, 1941-1944 it was occupied by German forces. Pskov and his defenders covered themselves with everlasting glory of fearless fighters. By the Decree of the President in 2009 Pskov was awarded the honorary title of «City of Military Glory.»

From St.Petersburg, Riga, Vilnius by train.

If you prefer comfortable travelling without time/money limit you can also make trip by car.

Pskov has the same time zone with Moscow 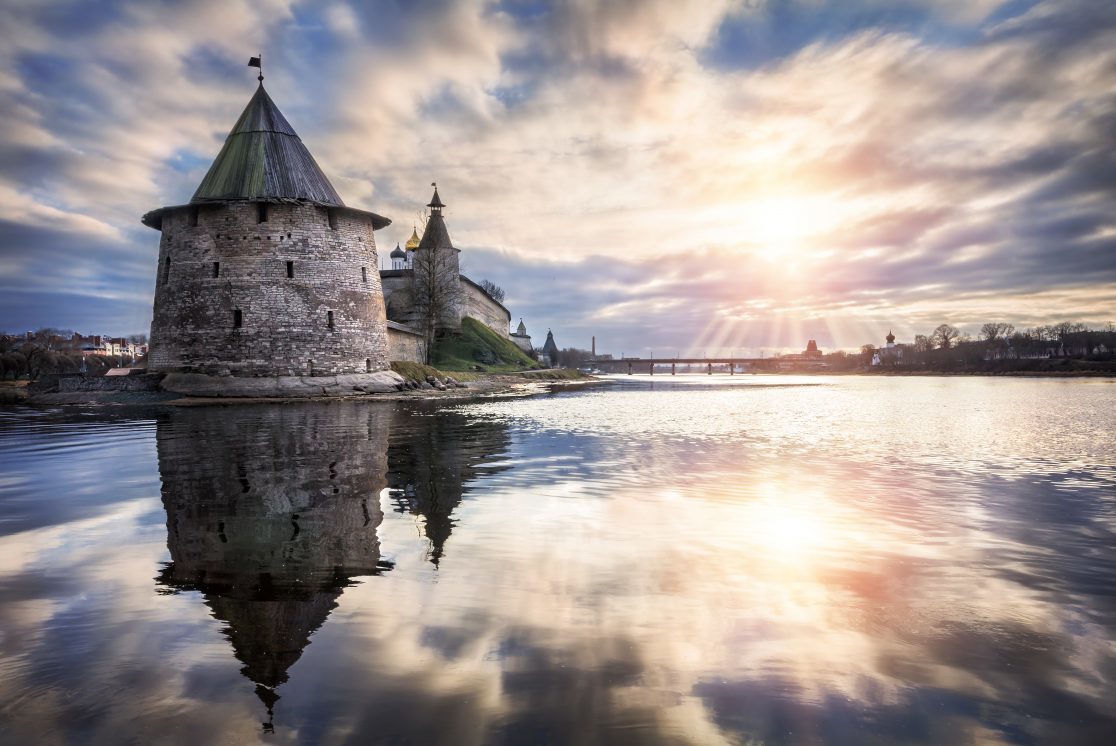 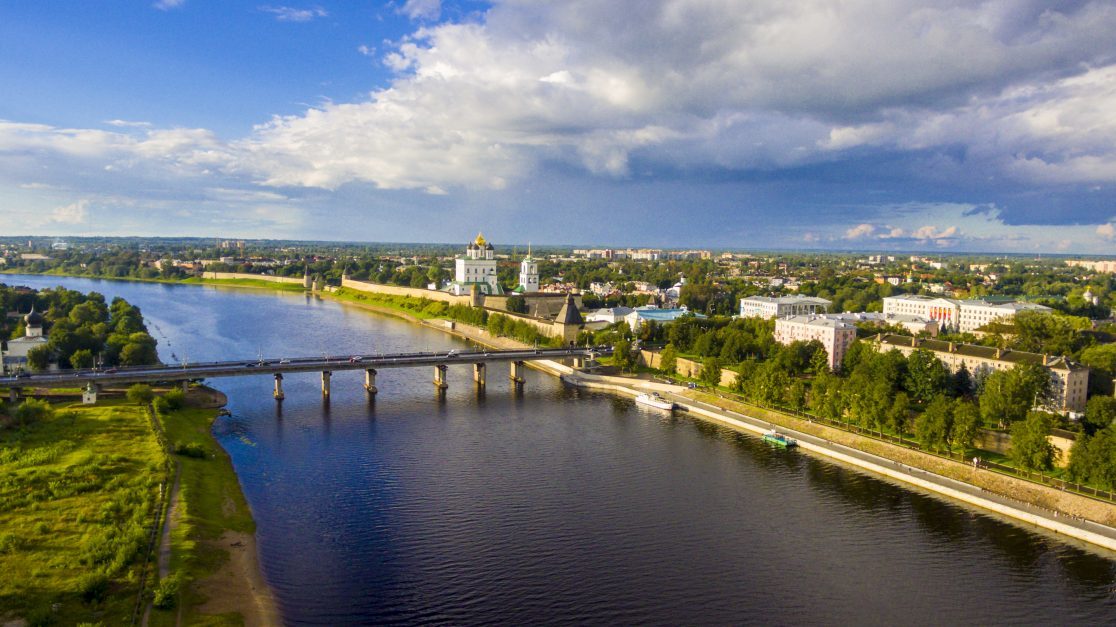 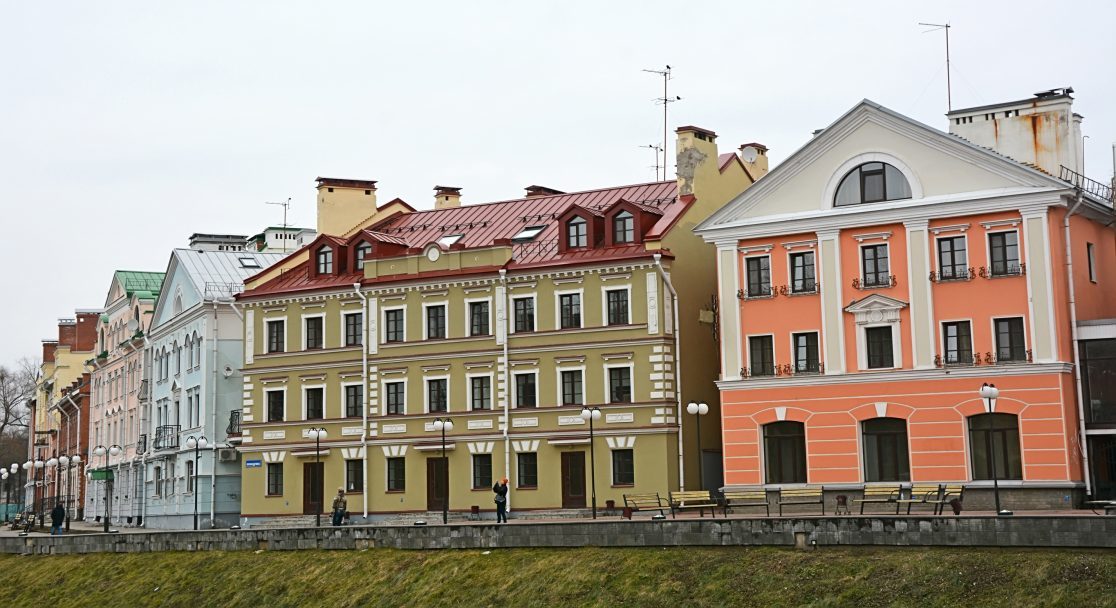 We recommend you to make the standard tour brighter and add the following to the program:

The traveler who is in Pskov for the first time is attracted by Kremlin and Trinity Cathedral, visible from everywhere. Many tourists start exploring the city from this place. But we recommend postponing your visit to Kremlin till the evening: it is solemn in the afternoon, but empty. In the evening you can hear the bell chimes (the main bell cast in XVI — XVII centuries) and to look at the evening service, where the Cathedral Choir sings. Pskov Kremlin Moscow is much older than the Moscow one; construction of the wooden Kremlin began in the VIII century, and from the tenth century the walls has been rebuilt and strengthened in stone. In the center of the fortress, overlooking the harsh military walls, there is the main symbol of Pskov — white stone Holy Trinity Cathedral. The first wooden church on this place was built in the time of the legendary Princess Olga. 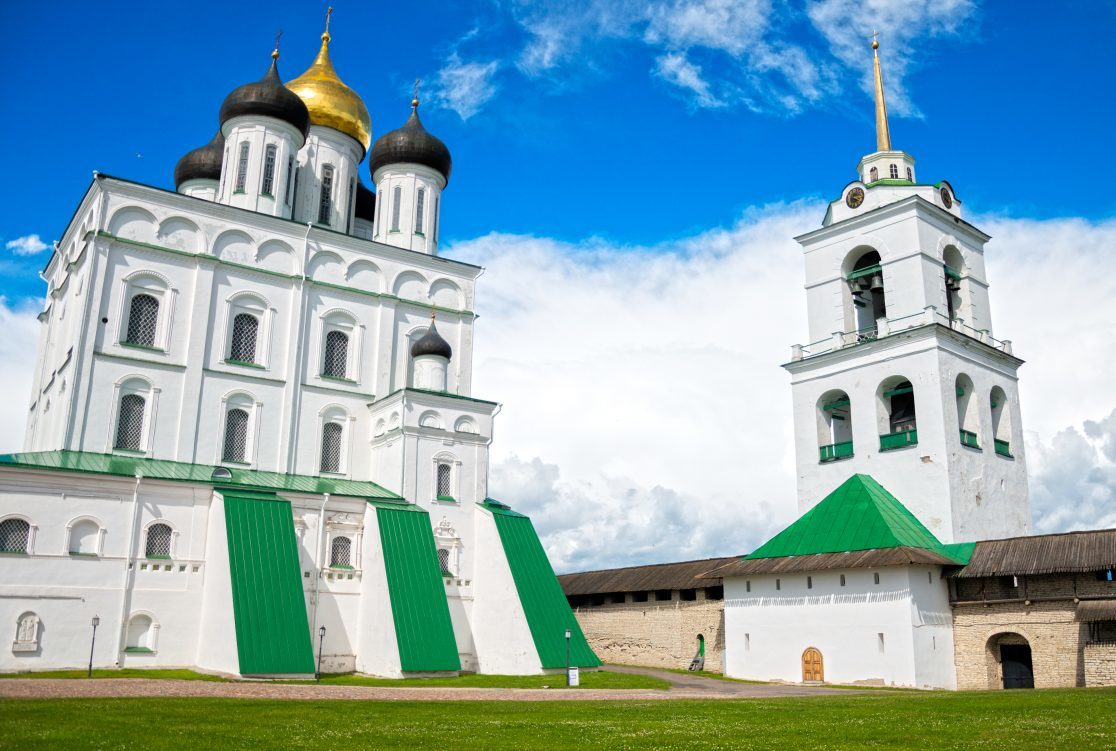 The museum is located in the Merchant Chamber of the 17th century. There you can see a collection of paintings, silver, icons, and trace the history of Pskov from ancient times to the present, get acquainted with the life and traditions of different eras of Pskov, the spirit of the region of rich historical and cultural heritage.

Mirozhskiy monastery is located roughly opposite the Pskov Kremlin, where the river Mirozha joins the river Velikaya. It was built by Novgorodian and Greek masters in the period of the spread of Christianity in Russia. The most important building is the Christ Transfiguration Cathedral. The frescoes of it were considered the second-best preserved frescoes of entire pre-Mongolian Russia after Spas Nereditsa in Novgorod. Since Spas Nereditsa was largely destroyed in the 2nd World War, the frescoes of the Christ Transfiguration Cathedral are now the most important early paintings in Russia. 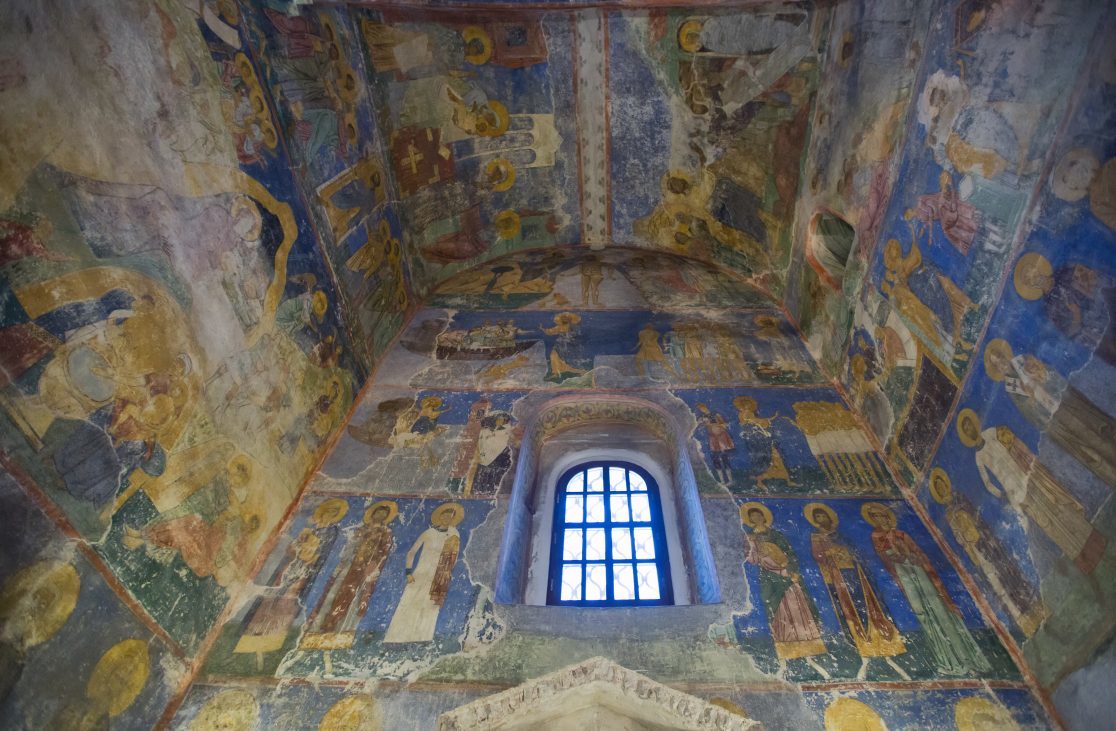 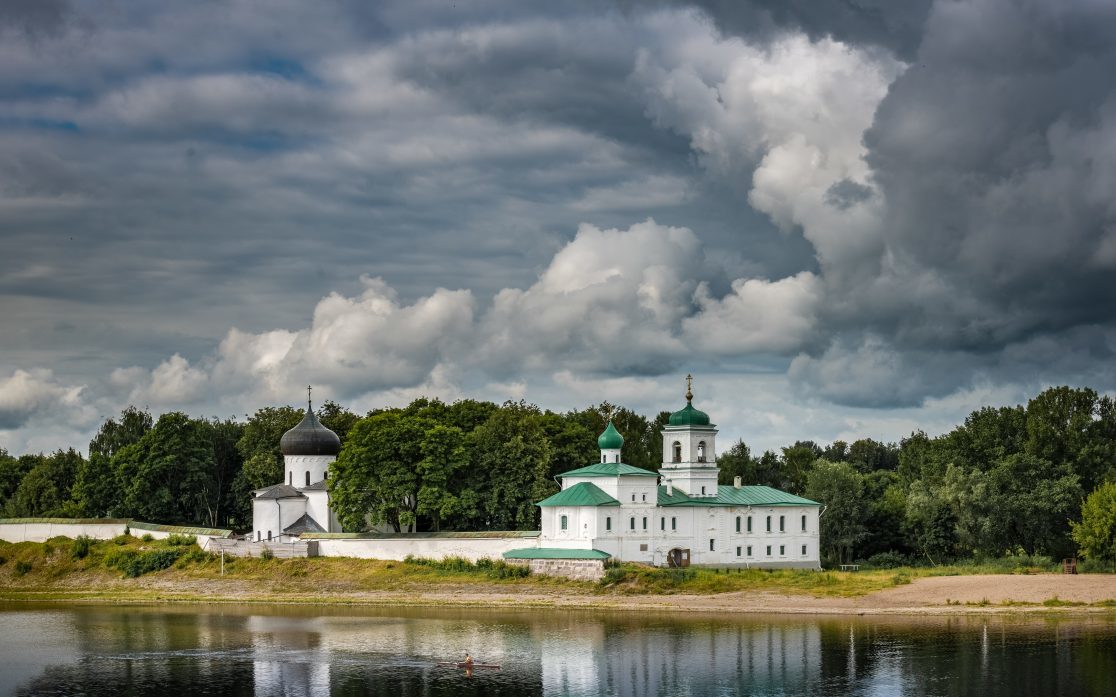 Izrbosk settlement appeared in ancient times. In the VIII-IX centuries, this land was inhabited by Slavic tribes — Kriviches.

The first mention of Izborsk in the Chronicles is dated 862 in the legend of the invitation of Varangian princes to Russia. Truvor, Rurik’s younger brother began to reign in Izborsk. And to this day the most ancient fortified settlement in Izborsk is called Truvor’s settlement. Not far from the fort there is Truvor’s grave, under a huge stone slab the legendary Viking was buried.

In 1330 a stone fortress was built on a very convenient place — on a high mountain, which has a flat and a spacious territory. From the north, south and east the fortress was well protected by a steep slopes and the ravine. From the high promontory there was a picturesque view to the valley.

Izborsk fortress looks like invincible giant, especially from Truvor’s settlement, as if it has grown out of the rock and has become it’s natural extension.

In Izborsk and its surroundings there are many underground sources or springs. When you are visiting Izborsk fortress follow the arrows behind the walls that tell «Slavenske Kliutchi». There are more than 12 springs coming from the stone. Most of springs are joining into one main waterfall.Each of them has its own history and its own name «Health», «Beauty», «Long life», etc. Many are sacred and have, as they say, the power to heal. It is a place where you can make your most secret wish. Springs have names. You have to take some water in your palms, make a wish and swallow 3 gulps, then spill the remains of water on the ground. The ritual should help to make your wish come true.

A good tradition has ingrained in Izborsk in the last decade — to consecrate Slovene keys in Bright Week – in the day of the Orthodox icon of Our Lady of Sorrows «Life-giving Spring».

Festival «Isaborg» is dedicated to the Day of Russia and is held in Izborsk June 11-12. «Iron Castle» Festival takes place in the first half of August. 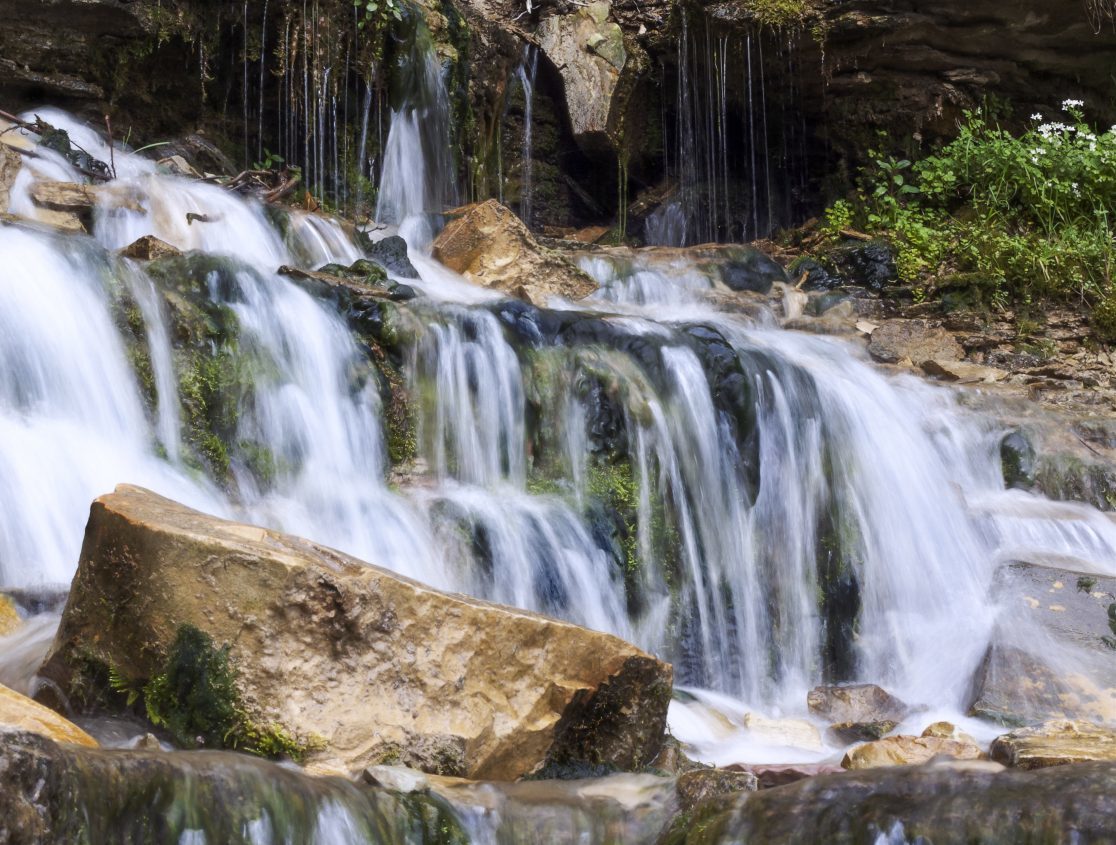 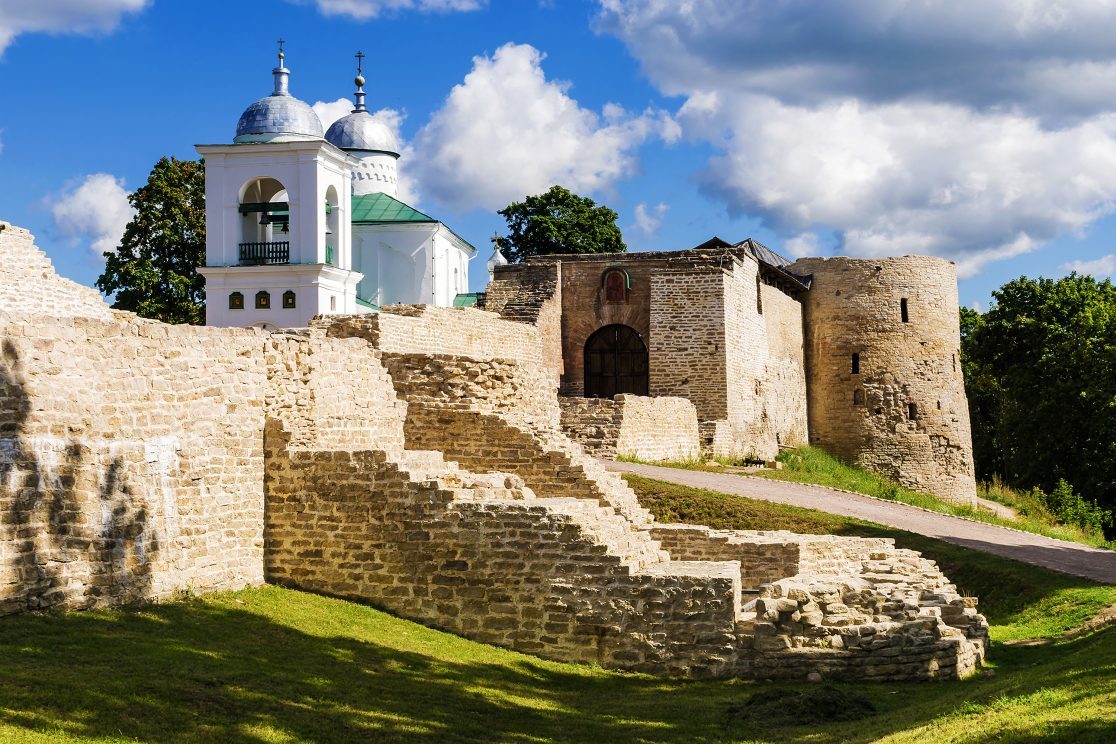 Everyone visiting Pskov should not miss an opportunity to visit Pechiory Monastery. This is the oasis of calmness and peace in spite of numerous pilgrims and tourists. Here you can find the answer to all your questions. The Pechiory Lavra escaped the tragedy of post-revolution destruction in Russia. It was in territory of Estonia in 1920-1940. And that’s why the monastery is practically untouched.

Since the fall of the Soviet Union the monastery has flourished. Currently the monastic community numbers over 90 who through their pastoral labors live the tradition of asceticism and eldership. In 2013 the monastery celebrates the 540th anniversary of its existence.

The monastery is located in a deep and wide hollow, at the bottom of which flows the Kamenets Stream. It is surrounded by a system of strong fortifications. The road, which slopes gently downhills, leads you past the Church of St. Nicholas (1564) to a world of bright colors and varied architectural styles.

In the Church of the Intercession there is an entrance to the famous caves of the Pskov-Pechiory Monastery — an ancient tomb for monks who devoted themselves to the monastery and to other people. About 10 000 bodies are kept in these caves, which have constant temperature and humidity all year round. This place of interest creates a great impression. It is not easy to get to see these caves so it is best to find beforehand how to arrange the visit. 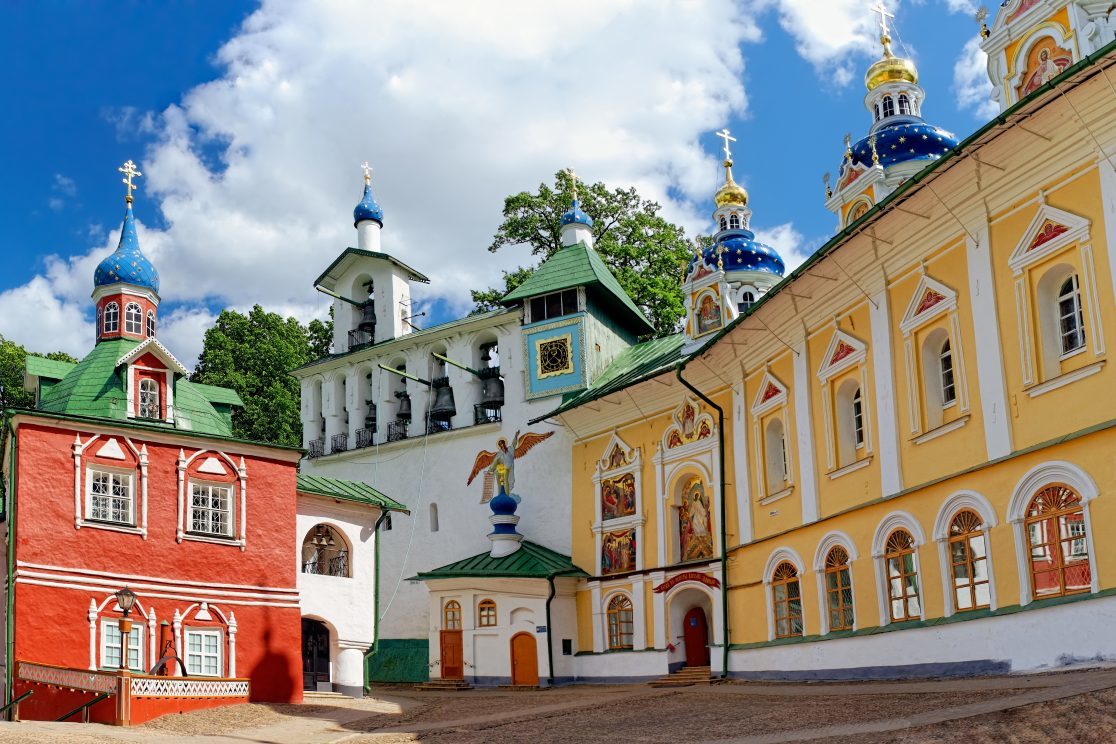 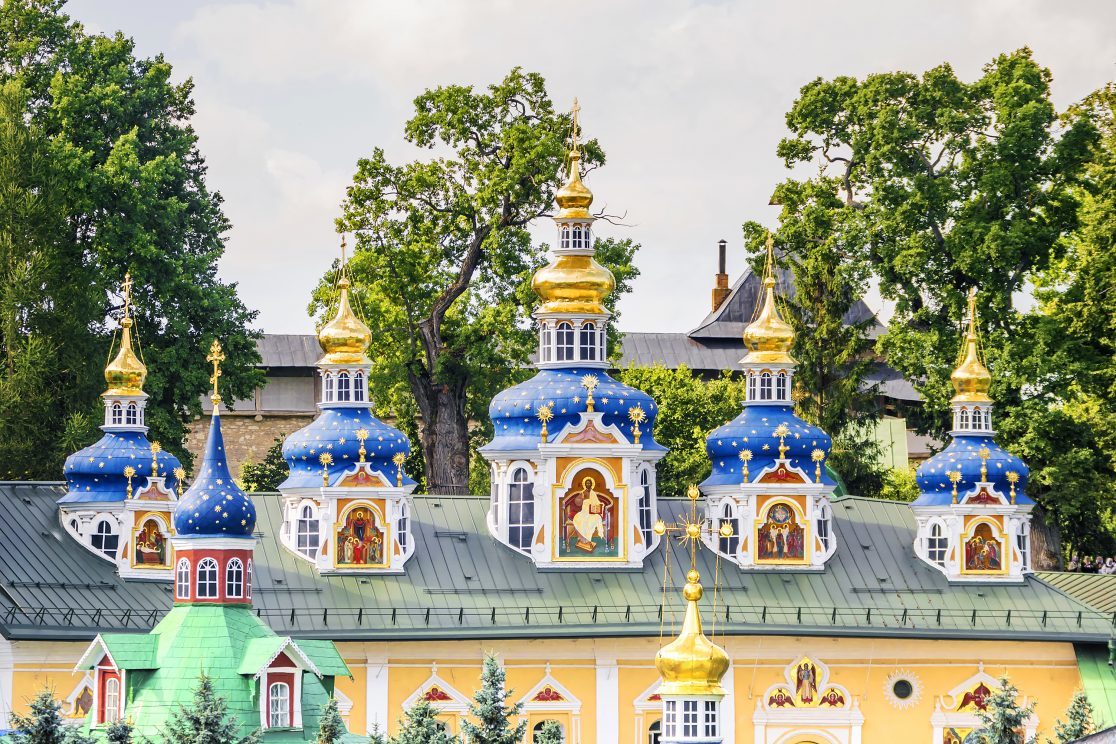